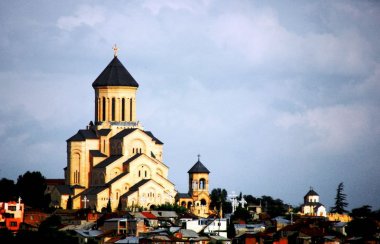 Adjara
Batumi – The capital of Adjara is located on the south-eastern coast of the Black Sea, with more than 135 000 population. Batumi is important transport, tourism and cultural centre. The city is served by the airport, marine, railway and auto stations.
One of the beautiful recreational and cultural coastal park of the Black Sea is Beauty of Batumi – with colorful musical fountain, tennis places, summer cafe-bars. The hotels are placed in the central part of the city.

Kakheti
Davit Gareja Caved Monastery
David Gareja Cave Monastery was founded in the 6th century by David, one of the 13 Syrian Fathers who preached Christianity to the Georgian people. The complex is located in the semi-desert and consists of 19 monasteries. The most ancient is Lavra Monastery holding the tomb of Father David, while the painted caves of Udabno Monastery look out over a starkly beautiful landscape of striated valleys and windswept ridges giving stunning views over to neighbouring Azerbaijan.

Imereti
Bagrati Cathedral (11th century) was the tallest church in Georgia (57m) until an explosion in the 17th century reduced it to picturesque ruins. Even in its ruined state, you can’t help but admire the stately grandeur of this lofty cathedral as it gazes down upon the city of Kutaisi.

Kartli
Uplistsikhe is the oldest cave town in Georgia. Back in the second millennium BC it was a flourishing city situated on the great east-west trade route, the Silk Road. Visitors can still walk among the ancient streets, rock-carved theatre, royal halls and pharmacy, while the remains of granaries and large clay wine vessels give us some clue as to the daily life of the inhabitants.

Mtskheta-Mtianeti
Jvari Monastery - Jvari or Jvari Monastery is a Georgian Orthodox monastery of the 6th century near Mtskheta (World Heritage site), Mtskheta-Mtianeti region, eastern Georgia. The name is translated as the Monastery of the Cross. For another, Jerusalem-located Georgian monastery with the same name, see Monastery of the Cross.
Jvari Monastery stands on the rocky mountaintop at the confluence of the Mtkvari and Aragvi rivers, overlooking the village of Mtskheta, which was formerly the capital of the Kingdom of Iberia.
According to traditional accounts, on this location in the early 4th century Saint Nino, a female evangelist credited with converting King Mirian III of Iberia to Christianity, erected a large wooden cross on the site of a pagan temple. The cross was reportedly able to work miracles and therefore drew pilgrims from all over Caucasus. A small church was erected over the remnants of the wooden cross in c.545 named the “Small Church of Jvari”.


The present building, or “Great Church of Jvari”, was built between 586 and 605 by Erismtavari Stepanoz I. The importance of Jvari complex increased over time and attracted many pilgrims. In the late Middle Ages, the complex was fortified by a stone wall and gate, remnants of which still survive. During the Soviet period, the structure was largely ignored, with access rendered difficult by tight security at a nearby military base. After the independence of Georgia, the building was restored to active religious use. Jvari was listed together with other monuments of Mtskheta in 1996 as a UNESCO World Heritage Site.


The Jvari church is a very early tetraconch (i.e. a four-apse domed building) structure. Between the apses there are three-quarter circular niches used as side chapels, which communicate with the central space. The transition from the square bay to the dome circle is effected through three rows of squinches. This design had a great impact on the further development of Georgian architecture and served as a model for many other churches not only in Georgia, but the whole region of South Caucasus.
Varied bas-relief sculptures with Hellenistic and Sasanian influences decorate its external facades, some of which are accompanied by explanatory inscriptions in Georgian Asomtavruli script. The entrance’s tympanum on the southern facade, is adorned with a relief of the Glorification of the Cross, and the same facade also shows an Ascension of Christ.

Nikortsminda - Nikortsminda was built in 1010-1014 during the reign of Bagrat III of Georgia and was repaired in 1634 by the King Bagrat III of Imereti. Three-storied bell-tower next to the Cathedral was built in the second half of the 19th century. Frescoes inside the Cathedral date from the 17th century.
The Cathedral is on the Tentative List for status as a UNESCO World Heritage Site.
Stylistically, Nikortsminda reflects the Georgian cross-dome style of architecture.
Nikortsminda has a massive dome and has unbroken arcatures as its twelve windows, which are decorated with ornamented architraves.

Interior
The Cathedral has a form of five apses from inside and the massive dome rest of the on the half-pillar shaped apse projections. The transition to the dome circle is affected by means of pendentives. Altar apse bema and the western passage make the space greater inside. Interior is decorated with frescoes from the 17th century and the rich ornaments, reflecting the mastery of the late-Medieval Georgian ecclesiastic art.

Exterior
From the outside the Cathedral shapes like a short-armed rectangular cross and has a short segment to the west. The fecades of the Cathedral is covered with smoothly hewn stone. Decorations include unbroken arcatures and various rich ornaments including multiple-figured story-telling reliefs and episodes ( The Transfiguration, The Judgment Day, The Ascension of the Cross, figures of saint, real or imaginary animals, forming one premeditated program). Nikortsminda has one of the most beautiful decorations from all Georgian churches and cathedrals because several different styles can be seen among the them, telling the richness of the selection of motifs and the manner of execution.

Khertvisi fortress - Khertvisi fortress is one of the oldest fortresses in Georgia and was functional throughout the Georgian feudal period. It is situated in Southern Georgia, in Meskheti region. The fortress was first build in the 2nd century BC. The church was built in 985, and the present walls build in 1354. As the legend says, Khertvisi was destroyed by Alexander the Great. In the 10th-11th centuries it was the center of Meskheti region. During the 12th century it became a town. In the 13th century Mongols destroyed it and until the 15th century it lost its power. In the 15th century it was owned by Meskheti landlords from Jakeli family. In the 16th century the southern region of Georgia was invaded by Turks. During next 300 years they have owned Khertvisi too. At the end of the 19th century Georgian and Russian army returned the lost territories and Khertvisi became the military base for Russian and Georgian troops. Khertvisi fortress is situated on the high rocky hill in the narrow canyon at the confluence of the Mtkvari and Paravani Rivers.

Ushguli - Ushguli or Ushkuli is a community of villages located at the head of the Enguri gorge in Upper Svaneti, Georgia. The Ushguli villages contain buildings that are part of the UNESCO Heritage site of Upper Svaneti. Altitude claims vary from 2,086 to 2,200 metres. Ushguli is considered to be the highest inhabited village in Europe. It is located at the foot of Shkhara, one of the highest Caucasian summits. About 70 families (about 200 people) live in the area, enough to support a small school. The area is snow-covered for 6 months of the year, and often the road to Mestia is impassable. Typical Svanetian protective towers are found throughout the village. The Ushguli Chapel located on a hilltop near the village dates back to the 12th century.